News Ticker
Four European partners are working together on a common vision for Belgian airspace by 2030 which features a functional airspace design that can be efficiently and flexibly managed to deliver optimised services which will all help to safely create more capacity for all users.

Belgian’s Airspace Vision 2030 is the name of the joint vision of Belgian ANS provider skeyes, the Belgian Civil Aviation Authority, its defence ministry and Eurocontrol MUAC.

A common vision on Belgian airspace was needed for various reasons. The Belgian airspace is very complex. It is a limited but very busy airspace with many users: commercial and military aviation, aerial work, private and recreational air traffic, unmanned air traffic. The proximity of several major airports in neighbouring countries also causes complexity as air traffic passes through lower Belgian airspace.

The complex airspace structure and its geographical position means the potential for exploiting full capacity of airspace is challenging. The current lay-out in different zones for different users creates disadvantages for each of them: airports cannot always use their full capacity, airlines cannot always fly the most direct routes and military airspace is too limited for the future generation of fighter aircraft. Meanwhile, there is too little uncontrolled airspace for recreational air traffic.

The three air traffic controllers operating in Belgian airspace – skeyes, Defence and Eurocontrol MUAC (managing air traffic above FL 245/7.5 km) – have each managed their part of the airspace independently of each other although that means that capacity remains unused.

By 2030, the Belgian airspace must form one whole area that can be used in a flexible and dynamic way. More efficient use of airspace will be able to guarantee sufficient capacity for all users with minimal limitations. Such an airspace structure – and the management of it – also fulfils the European objective of a Single European Sky.

The partners say it should be possible to activate, deactivate or allocate certain airspace zones  to one specific user for a limited period in time. That way, for instance military airspace or airspace for aerial work could be restricted or the periods in which it is used could be limited for the benefit of other air traffic. Military operations would thus be guaranteed but the total capacity of airspace for other users would be extended, allowing them to better plan their flight routes. That predictability again increases the efficient use of airspace.

On a technical level, the three partners will investigate if it would be possible to use an integrated system for air traffic control by 2030, this way ensuring air traffic management and safety with a single, unified approach. Today, each of these instances still works with its own system.

Airspace Vision 2030 brings advantages for all users of the Belgian airspace. The main progress for everyone is of course the extension of airspace capacity.

Airlines can still count on safe air traffic, even with unmanned air traffic emerging. They will be able to plan their flight routes better and fly direct routes as much as possible, saving them time – on the ground as well as in the air – and consumption, which also has positive effects for the environment.

The predictability of flights is also a big plus for airports. A more efficient planning will allow them to make maximum use of their infrastructure’s capacity, for example through the smoother traffic flow on the – possibly extended – runways. Reliable airport capacity is an enormous asset in both attracting or retaining customers.

The partners say the advantages of a common civil and military air traffic control are well demonstrated and will shortly be noticeable in practice.

The vision is a reference document followed by the planning and the execution of specific projects and investments to improve the structure, the management and the services in the Belgian airspace. Some projects have already been launched.

Johan Decuyper, skeyes chief executive said: “The aviation sector is the second economic pillar of our country. Internationally there is an enormous competition in every domain of aviation, also for air traffic control and airspace management. Together with our partners we want to keep the Belgian airspace attractive and keep its management in our own country. The Air Space Vision 2030 enhances the capacity of our airspace and ensures the fluidity and safety of air traffic. A common vision and the coordinated execution of it provide us with an advance in the international competition for airspace.”

General Frederik Vansina added: “The integration of new military platforms, with their adjusted training needs, in combination with the progressive increase of civil air traffic, definitely constitutes a major challenge in the busy and very complex Belgian airspace. Through more intense collaboration with our partners we aim at managing the airspace in the most efficient way, taking all airspace users in consideration, but without losing sight of flight safety and flexibility. This vision that is supported by all departments creates a framework for the development of a common airspace policy.”

Eugeen Van Craeyvelt, director-general of the Belgian Civil Aviation Authority also commented: “Air traffic is increasing day by day and airspace is becoming saturated ever more. That is why an initiative was launched at the Belgian level to review and optimise the Belgian airspace. The Belgian Airspace Vision 2030 is the result of a joint reflection by skeyes, the Belgian Civil Aviation Authority, Defence and Eurocontrol MUAC and was signed by the Ministers of Defence and Mobility. We are currently translating this vision into an action plan. The Netherlands are doing the exact same exercise. The long term goal is a common plan to optimise the Benelux airspace.”

John Santurbano, director, Eurocontrol MUAC: “MUAC is determined to offer the best possible service to the almost 2 million airspace users who cross the airspace that is allocated to MUAC. The challenges in Belgian airspace are on the one hand the complexity due to the proximity of the big European airports but on the other hand the saturation of the airspace due to the suboptimal lay-out that still follows national borders. In collaboration with our civil and military partners, supported by the authorities and the European Commission this situation can be optimised. The Belgian vision contributes to this optimisation.” 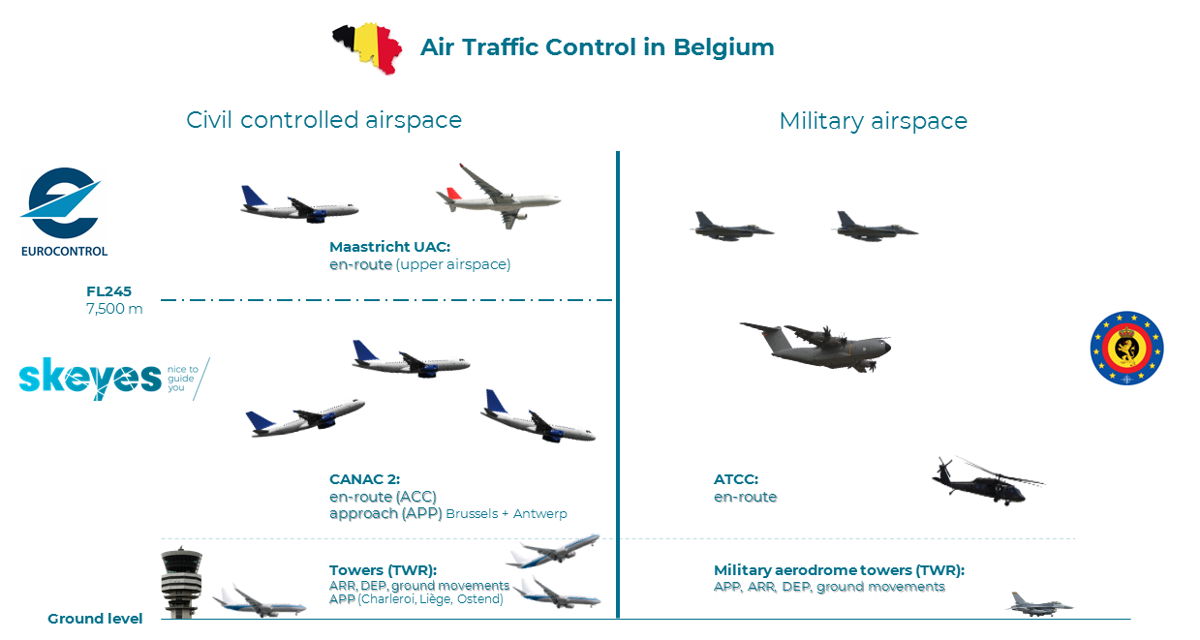